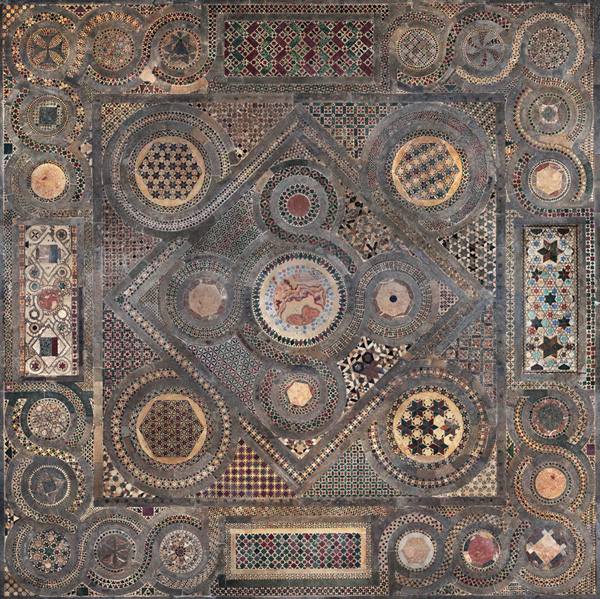 The Cosmati pavement after cleaning and conservation. Courtesy of Westminster Abbey.

SLUMBER PARTY!  My girlfriends and I had a late night audience with the Big Screen in order to witness live coverage of the last vestiges of pomp and circumstance—The Royal Wedding. We sipped warm Horlicks from Wills & Kate commemorative mugs and nodded off during the commercials. But once I laid eyes on the intricate geometric pavement of the Muniments room, I perked up and forgot all about the HATS!

YEARS OF CONSERVATION WORK and a grant from the Getty Foundation, put this 13th century inlay pavement in tip-top shape for all the world to see. Cosmati work, also known as Opus Sectile work, is a form of precisely cut inlay work, named after a Roman family of skilled architects, craftsmen, and mosaic workers. Cosmati work was fashionable in the 12th and 13th centuries, but descriptions of this work can be found as far back as 20 B.C. to the writings of Vitruvius and Pliny the Elder.

This pavement is one of the last few existing in-situ mosaic examples left in England. It was laid down in 1268. Thirty-eight kings and queens have been crowned standing upon this Cosmati Pavement. According to Westminster Abbey, the complexity and subtlety of the design and workmanship can be seen nowhere else on such a large scale. The massive pavement is almost 24’10” square, (7 m 58 ccm) with dimensions calculated in Roman feet. The four-fold symmetrical pattern exhibits a harmonic pattern built from pieces of colored porphyry stone, cut into a variety of shapes: triangles, squares, circles, lozenges, and rectangles. There is the addition of colored glass, which breaks with the pure Italian tradition. MOST INTRIGUING TO ME are a series of Latin inscriptions that accompany the floor design indicating the maker’s intention for the cosmic relationship to numeric attributes found in the pavement. These numbers have specific meaning. The main design theme is four-around-one, known as a quincunx,( a unit of 5), and is one of the quintessential designs of Cosmatesque inlay stonework.

This orbit of roundels around the central onyx piece is indicated as the ‘primum mobile’, an early Renaissance concept that means the movement of the world, or the daily movement of the Heavens around the Earth. A translation of one of the inscription describes it: “the spherical globe represents the archetypal macrocosm”.  Primum Mobile represents  the number ten, and one can note that the design is four-around-one – the quincux indicated twice, both contained in squares. The corners also incorporate ‘five count’ roundels at each corner. FIVE is traditionally the number of life, fecundity, and fertility. To the Pythagoreans, five represented marriage. OK, now we’re talking! THE MEETING OF HEAVEN AND EARTH- The central roundel is made of a beautifully varigated and carefully selected piece of onyx, bearing this description from a medieval monk. “…the round stone, having in itself the colors of the four elements, fire, air, water and earth”. Each pattern orbiting the central square are different: one is circular, (all encompassing)  one hexagonal, (6-sides) one heptagonal (7-sides) and one octagonal (8-sides). The infill patterns are all different.  So in this beautiful cosmic diagram we see the progression of all number inhabited symbolically as a geometric meeting of Heaven and Earth. The three damaged inscriptions, formed of brass letters, refer to the end of the world, calculating that it will last for 19,683 years.  So, the troth of Prince William to Catherine Middleton was not only sealed by God’s holy law, but by the cosmos itself!

THIS RELATIONSHIP TO NUMBER AND COSMOS as interpreted in pavement, relates directly to my presentation last Saturday at the Legion of Honor Museum, concerning the geometric relationships of the Lod Mosaic to nature and number. The Lod was created nearly 1000 years prior to the Westminster pavement. My thesis focuses on geometric symbolism of mosaic pavement patterns  expertly commanded by the ancient craftspeople.