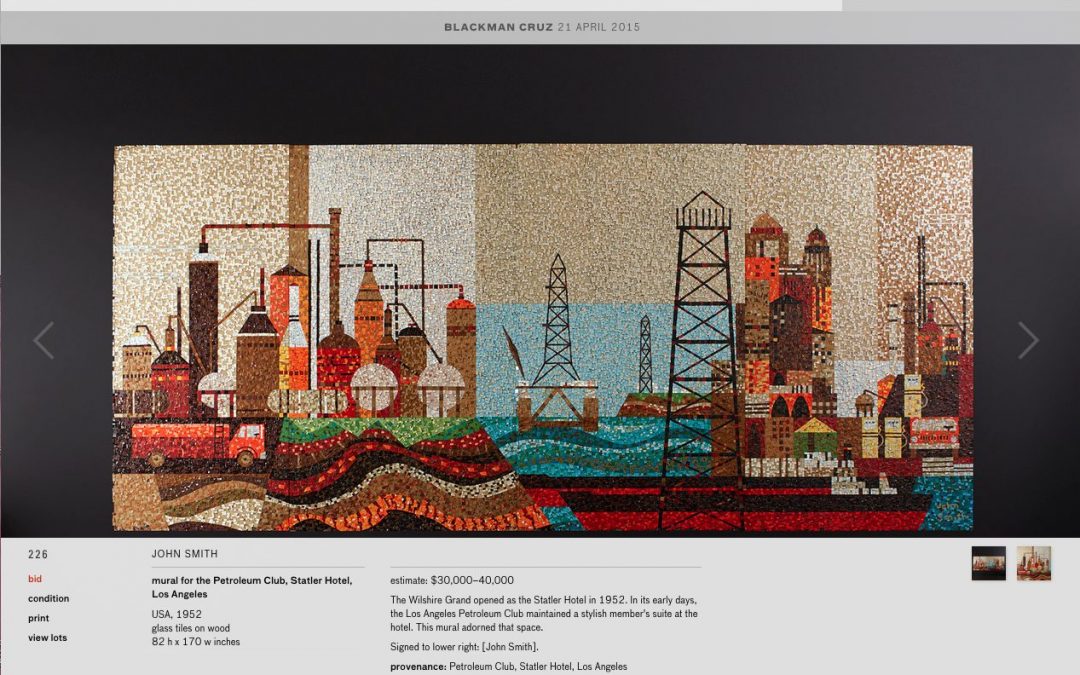 Its been three years since I began the investigation and wrote this article “Black Gold: Thar’s Oil in them Thar Walls” for MosaicArtNOW. It’s a veritable mystery tour of the discovery of a brilliant midcentury mosaic by designer/textile artist John Smith, buried behind plywood and drywall at the old Statler Hotel in Los Angeles. The Petroleum Club mosaic was bought by a private collector, who cleaned the massive work and now has it up for auction with Blackman Cruz Auction house in Los Angeles.  This spectacular piece will go on the block as LOT 226 on April 21, 2015. Suggested estimate at $30,000-40,000. I will be watching closely.

Page from the auction website, states info gleaned from my article.

The timing is particularly relevant because another large scale architectural mosaic was uncovered in New York City, by Max Spivak, Spivak had done work for the same Statler Hotel, but the work had been destroyed in one of the many hotel renovations years ago. You can see Spivak’s original abstract work in this newspaper clipping which I found and included in the article.

Spivak’s work was resurrected from behind the walls and is now covered again, to protect it during renovations. Will it be on view again remains to be seen. Read about it here.

A version of this article will also appear in the SOCIETY OF COMMERCIAL ARCHAEOLOGY Spring 2015 NEWS. thanks to Douglas Towne, editor.

Midcentury mosaic found behind layers of paneling …now what? Read more at MosaicArtNow.com