King of Cool Funds the Pool 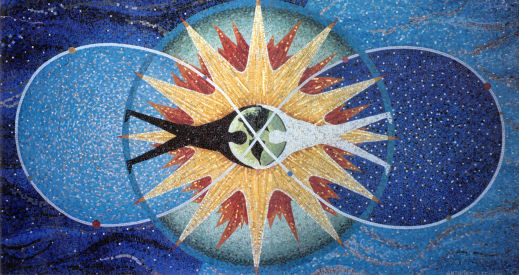 After 12 years in limbo, the reinstallation of “Brotherhood of Man” a 1968 mosaic mural by artist Anthony Stellon is now re-located at Franklin Square Park (16th & Bryant Streets) in San Francisco, California.

The mural’s original site was the Dr. Martin Luther King, Jr. Recreation Center and Pool, and the funding has roots in a terrific Hollywood backstory.

The ink was barely dry on the Voting Rights Act of 1965 when Dr. Martin Luther King, Jr. was assassinated in April of 1968. That same year, San Francisco Mayor Joseph Alioto commissioned the  young artist Anthony Stellon to create an important piece of civic art. The mural was intended for the Recreation Center in Hunter’s Point/Bayview, a racially segregated area in the outskirts of the city. The Rec Center would house San Francisco’s first community pool for African Americans  and be named in honor of Dr. King. (1)

When the rebel “bad boy” star, Steve McQueen was in town filming Bullitt, McQueen’s company Solar Productions along with Warner Brothers needed to shoot a high-speed chase scene that would take place throughout in the city. Despite his tough exterior persona, as a young boy McQueen had been deeply affected by growing up in a broken home and being shuttled through various boy’s schools. His humanitarian efforts leaned toward helping children, which he did mostly in secret. (2)

The King of Cool Supports the Pool – Steve McQueen, Mayor Joe Alioto, and his daughter Angela, attend the groundbreaking with kids from Hunter’s Point.
Image from article published 26 May 1968 in the San Francisco Chronicle, a day after the event. The mural itself was unveiled around 1 Apr 1969 (source: 2 Apr 1969 Chronicle article)

Though his gift to Hunter’s Point pool was made public, his inclination to help disadvantaged kids in San Francisco was no exception. I have to wonder about the children in the photo, and what they might remember about the experience of meeting the Hollywood star? Alioto, on the other hand, had the task of raising money for his new pool and this was before the City of San Francisco was charging for film permits. Peter Hartlaub, a Chronicle Staff Writer wrote in 2003, about the backstory to the car chase (3):

“According to the legend, McQueen and San Francisco were brought together by a patch of undeveloped ground in a Hunters Point youth park.”

In a face to face meeting, they came to a gentleman’s handshake that if McQueen supported the pool, the production company would have the all the access and city support they needed for shooting the chase scene. According to Hartlaub’s article the exchange went like this:

“Mr. Mayor, you’ve got yourself a swimming pool.”

“Then you’ve got yourself a city.”

Steve McQueen attended the groundbreaking ceremony to great fanfare, where he presented a check for $25,000 toward the construction of the Martin Luther King Jr. Recreation Center. For the design and production of the mural Anthony Stellon donated 3 months of full time work, and Alioto paid $1000 for the materials out of his personal funds.  It was a labor of love.

The car chase scene is rated one of the top in film history, it took place in nine city districts — with a finale on the tarmac at San Francisco International Airport. And for you motorheads: it’s a 1968 Ford Mustang 390 GT 2+2 Fastback pursuing a 1968 440 Magnum four speed Dodge Charger.

That’s McQueen in the ‘Stang.

1) For more background on civil disobedience at white-only pools see “Acid in the Pool: an Ongoing Struggle for Civil Rights.  Accessed Sept. 15, 2010, http://www.pattyhume.com/2010/02/11/acid-in-the-pool-an-ongoing-struggle-for-civil-rights/.
2) http://www.mcqueenonline.com/humanitarian.htm
3.) http://www.sfgate.com/movies/article/CUT-TO-THE-CHASE-Classic-scene-in-McQueen-s-2580656.php
If anyone recognises or knows the children in the news photo, I’d love learn more about that day and their remembrance of the pool, and mural.