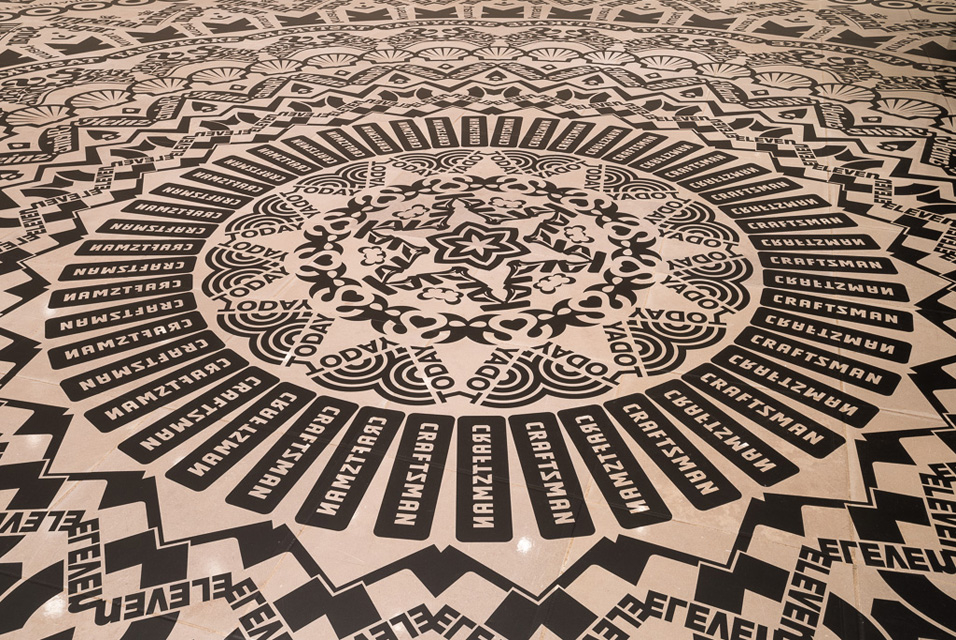 If you are a regular visitor to this blog you may have explored the right sidebar,  where I curate a roster of “Mandala Artists” who are working with the mandala form in unique and provocative ways.

Inclusion on the list has to do with my personal draw to the artworks; it can be a response to the artist’s ethos, the material, the scale, use of pattern, or mastery of a technology. The common strand has to do with expert craftsmanship and a deep inquiry into the potentiality of the circle. Often these artists explore the contemporary zeitgeist of everyday consumerism with forms of Eastern spirituality.

Stockholm-based artist, GUNILLA KLINGBERG, whose installation is at Rice Art Gallery in Houston, Texas. “Wheel of Everyday Life” will be on view from Jan. 31 to March 17, 2013,

If you like Klingberg’s Logo pavements, have a look at Virginia Fleck’s plastic bag mandalas.

Gunilla Klingberg’s psychedelic animations have a family relationship with the more randomly formed kaleidoscope pattern, the strict geometry of Moorish patterning, the Persian carpet, and the ritual painting of Hinduism, the so-called mandala. The last of these is a picture which exists solely to function as a conduit for the observer’s concentration so it can immerse itself in an altered, suspended state. “I got the idea of letting the pattern grow by extending it from the gallery space out to the foyer space and meandering up the windows, to emphasize the viral aspect of the pattern. I like the fact that the foyer area also is a passage, there is no way to escape the pattern but one is forced to walk on it.” (thanks to Nancie Mills Pipgras, editor of Mosaic Art Now for mandala spotting)