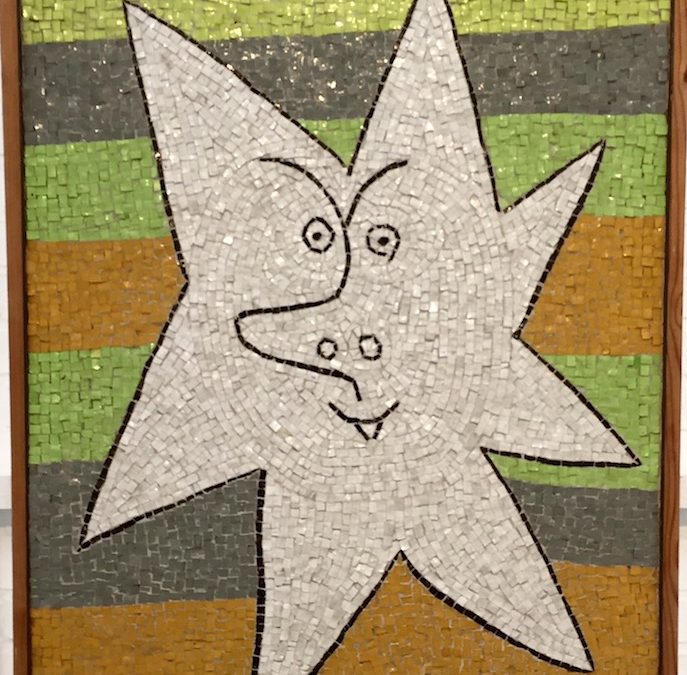 A marvelous mosaic mystery:  the Cote d’Azur in the 1950s, an enchanting young lover, and the missing mosaics of Pablo Picasso. An intriguing story about how one of the 20th century’s most influential artists explored the mosaic medium, and ponder what’s happened to the works since?

While reading a 1963 copy of Mosaics: Design, Construction and Assembly by British mosaicist, Robert Williamson, I discovered Pablo Picasso’s mid-century mosaics. Williamson published several pages of these works, some of which are reproduced in this article. Picasso (1881-1973) is renowned for his extraordinary artistic experiments in painting, sculpture, printmaking, ceramics, collage and even stage design; but I’d never heard Picasso’s name associated with mosaics. I’m excited to report he did not leave this stone unturned, collaborating with mosaicist Hjalmar Boyesen, who executed Picasso’s designs.

According to a Dorset (UK) newspaper article, artist Hjalmar Boyesen and Picasso became acquainted when Boyesen served as an American soldier during the liberation of Paris in August, 1944. Picasso’s first major mosaic work in this medium was the 1.5 ft. x 4 ft. plaque shown below. Though the photo is in black and white, Williamson’s accompanying description states, ”it has been done in six shades of grey, one large area of white, and several smaller areas of color.” The inspiration for this design seems to have been taken from a filmstrip or photographer’s contact sheet. The Cannes Film Festival, the many celebrities who visited his Cannes studio, and Picasso’s own cause célèbre were undoubtedly influencing his work.

The decade after the World War II was a very prolific time for Picasso. It was in the Cote d’Azur he began drawing on the Mediterranean sources that had inspired him in earlier years. The warm, sunlit coast and a return to family life renewed Picasso’s inspiration after the devastation of the war years. In the mid-50s, Picasso was living in the villa La Galloise, located in the village of Vallauris outside of Cannes in the south of France. From 1943 to 1953 he lived with painter, Françoise Gilot, (b. 1921 -) with whom he had two children, Claude born in 1947 and Paloma in 1949.  They never married because Picasso’s former wife would not grant a divorce.  Yet by 1953, Gilot had had enough, took the children and left Picasso.  He was angry, as Gilot was his first (and only) partner to leave him. Not to be undone, Picasso had set his eye on yet another young lover…

Picasso was relentless in his serial pursuit of women decades younger than himself. Picasso met Gilot when she was 21 and he was 61. Once Gilot left Picasso, his new muse and lover became Jacqueline Roque, (1927–1986), a beautiful and vivacious ingénue 46 years his junior. Jacqueline worked at the local Madoura Pottery where Picasso was furiously making ceramics by the thousands. Even at age 76, Picasso still possessed an unceasing capacity for making art. Besides his ceramic editions, Picasso was creating a series of over 50 versions of Velasquez’s Las Meninas, a painting depicting the Spanish court of Philip IV of Spain in 1656. The mosaics date from this same intensely active period.

By the summer of 1957, Picasso began making sketches specifically for mosaics, working closely with Hjalmar Boyesen in the mosaicist’s Cannes studio. Boyesen was a mosaicist with a penchant for abstraction. At the time of this writing, it’s unknown how he came to work with Picasso in southern France. There was a vibrant artistic community in Cannes, and their friendship was already established from Paris. Was it perhaps Boyesen who suggested the medium to Picasso? Did Picasso see Boyesen’s work and decide he wanted to work in the medium as well? Did Picasso invite Boyesen to Cannes?

Picasso’s mosaic panels were executed by Boyesen, assisted by an emerging British sculptor, Ralph Brown, who was on a study sabbatical in Italy that year and came to Cannes to work in Boyesen’s atelier. That summer in Cannes, the young sculptor was making his way around the Italian and Paris art scene, meeting Giacometti and many Italian sculptors of the day. The famous sculptor Henry Moore collected some of Brown’s early works and helped to launch his life long art career. Ralph Brown went on to teach at the Royal College of Art and maintained a life long sculpting career.

There are millions of images of Picasso’s work on the internet, yet multiple searches do not produce one single image source for these mosaics.  One wonders why?  Where are the rest of them?  Who bought them? Do they still exist and if so, where are they?  One website suggests an estimated 350 of his works have been stolen, more than any other artist. Are the mosaics among those missing assets?

The Williamson book does not indicate the materials used in the mosaics, but legal documents (more on this below) make reference to a fabrication in stone and colored glass. The pieces were set using the direct method onto wood panel, (as shown in the photo above) a common substrate of the era. The outline was marked out in paint.  One wonders if Picasso himself painted onto the surface or if Hjalmar was transferring Picasso’s smaller sketch onto the board. The pieces possess a certain calm, grounded feeling, in no small part due to Boyesen’s choice of setting style. The works are done in opus tessalatum, a linear setting matrix with the tesserae (pieces) cut to the same general size overall. Round faces, however, called out for a concentric setting pattern, with some directional, curvilinear intervention as needed, seen in the example of Tete Barbue.

With their child-like simplicity, Picasso’s designs capture a light-hearted quality. The distinct outlines reference his famous “napkin sketches”, though more likely, they were following on the series of 180 drawings of clowns and circus performers known as the Verve Suite and of course his Madoura ceramics, which also used the face as a dominant theme.

How Boyesen and his artist wife, Dorothy, came to live and work in Cannes during the 50s is unclear, but they were on very friendly terms with Picasso and Jacqueline. The couples often visited and Picasso celebrated the birth of the Boyesen’s first son in 1958 by sketching Dorothy holding their newborn during a visit to the villa. “I think my husband was so thrilled to have a son that had to be the first thing he did – showing him to Picasso,” said Dorothy in a 2010 news article. “Picasso did his bit to make us feel we had done something extraordinary – as if we’d done something nobody else had ever done.” She added, “I didn’t know he was sketching me until it was time to go.We were saying our goodbyes and he gave me the sketch. I was very excited.”

Post-War America was burgeoning with enthusiasm for modern art—abstract works by Pollock, Rothko and deKooning were on the rise—and a lively interaction between Europe and New York was afoot. But the antiquated custom laws were in need of reform if the collectors and museums were to build their collections. Though Picasso’s work had stirred a fair amount of controversy over the years, it was in demand. In this case, it was not the content, but the object itself that piqued debate. When Picasso’s 3 ft. x 2.5 ft. mosaic panel titled Les Joutes was shipped to the USA in 1958, it became the object of a court ruling. U.S. Customs tied up Picasso’s mosaic for over two years, meanwhile identifying it as “bits of glass on stone.”  Certain forms of art carried no taxations, while others were heavily taxed due to the “manufacture” of materials used. Mosaic, sculpture, and collage were among the art forms levied at this time.

“Picasso was quite annoyed by all this,” stated an attorney representing the petitioner in a N.Y. Times article of May 1959. “He’s annoyed the U. S. Customs Inspectors can be so—shall we say—uncultured”. By September 1959, a unanimous act of Congress amended the Tariff Act of 1930 so the works of art were allowed to enter the country duty free.

End of an Era

The decadent, non-stop party atmosphere of the Cote d’Azur began to take its toll on Picasso’s increasingly private vision. Star-struck journalists were persistent in demanding his time for interviews, while a constant stream of visitors and dinner parties were de rigueur.

The events that brought mosaic making and Picasso’s relationship with Boyesen to a close are yet to be discovered. We do know that by the late 1950s Jacqueline was fiercely protective, becoming known as a “gatekeeper” amongst his friends. Perhaps in Jacqueline’s attempts to shield Picasso, Boyesen and Dorothy were no longer able to maintain the friendship or working relationship they had once enjoyed. Perhaps the young family departed for England to join Boyesen’s assistant Ralph Brown and the mosaic book author Robert Williamson?

During that decade, Picasso and Jacqueline moved from the villa La Galloise in Valluarius, to La Californie in Cannes, up to the Chateau of Vauvenargues near Aix-en-Provence, where he could work undisturbed. He was quite wealthy by this point, and acquired the magnificent Chateau property in 1958.  He moved his vast art collection to the Chateau, which they occupied between 1959 and 1962.  Subsequently they moved to Mougins, where Picasso spent the last 12 years of his life. It was in Mougins he died, so the story goes, at his own dinner party. Ever the bon vivant, his last words were “Drink to me, drink to my health, you know I can’t drink any more.” It is at the Chateau however, that both Picasso and Roque are buried, and the property remains in the family estate.

For now, Picasso’s mosaic works seem an enigmatic flicker as it appears art historians have generally passed over this aspect of Picasso’s artistic oeuvre. By publishing this investigation, perhaps further connections to Hjalmar Boyesen’s mosaic collaboration with Picasso will surface. Meanwhile, there is no doubt that Picasso continues to inspire mosaicists today—his paintings, and even his famous face, remain a source for interpretation by artists worldwide.

Picasso on Wikipedia: http://en.wikipedia.org/wiki/Pablo_Picasso  Accessed 14 May 2012

Video: http://www.youtube.com/watch?v=CkRS3wDg1xU  Scene from ‘Visit to Picasso’, a documentary by Paul Haesaert . Shows Picasso live painting on glass in his Vallauris atelier, 1949.

Scuola Mosaicisti del Friuli, http://www.scuolamosaicistifriuli.it  Teachers and students of Spilimbergo Mosaic School created the Picasso mosaic. The 8 x 4 meter “Guernica” mosaic was installed at Madrid’s Atocha train station on the anniversary of the 2004 bombings, on March 11, 2006.

And what about Picasso Mandalas?? Yes, we have them too. Click HERE