Meandering with Piece by Piece: Part 1 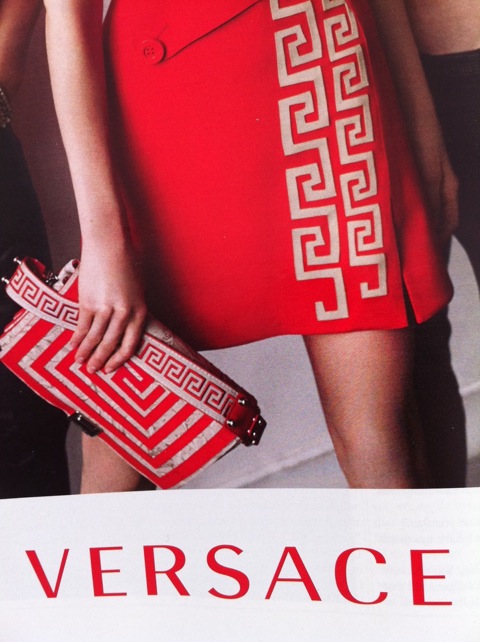 Meander… “A circuitous journey or excursion”.
In the spirit of sinuous unfoldings I offer this story as a series— one curve at a time…

The Greek Key is probably THE most famous ‘meander pattern’. Even if you don’t study art history, chances are you recognize this pattern and love it. It’s the ubiquitous brand of the ancient times—the Abercrombie and Fitch of decorative elements. There are a vast number of versions of this pattern. Even today, we find it used in surprisingly unexpected —and fashionable—ways.

I want this Dress

In March, I had the pleasure of circling back to Los Angeles for a month with the non-profit arts organization Piece by Piece. They were recently awarded a National Endowment for the Arts Grant and asked me to return as a visiting artist for their mosaic training program.  I proposed a series of four workshops on geometric borders, known as ‘meander patterns’. I was working simultaneously at the J. Paul Getty  Museum, offering artist demonstrations and gallery tours on their permanent mosaic collection, so the theme was a natural tie-in.

The plan was for Piece by Piece artists to create small studies of traditional Greek Key patterns, and participate in creating a larger group project of a 3 x 5 foot mural to be offered for sale at the fundraiser on June 4. We procurred 3/8″ vitreous glass tile donated by Maryland Mosaics to make our Greek Key borders. Photos from the workshop in our next post!

The word “meander” comes from Latin maeander, for circuitous windings, from Greek MAIANDROS, for the Maeander River in Phrygia. The river is mentioned in the Iliad, by Homer. The  250-mile long river, known today as the Menderes, in what is now western Turkey, has been famous since ancient times for its winding and convoluted course. The Romans adopted the name of the river in the Latin form “maeander” to mean “a winding path.”   By the 17th century, we were using “meander” as a verb to describe the action of a person who takes a long, long time to get there.1

Meandering is the opposite of  “How the Crow Flies”. I once worked as a guide for an outfitter in the Boundary Waters Canoe Area of northeastern Minnesota.  One summer my boyfriend came to visit me and we took a wilderness canoe trip together. In an effort to meet our pick-up time, we decided to take a short-cut through a meandering river. At that point in the summer, the water was extremely low and this “river” turned into a meandering nightmare of two foot high water choked with weeds and “no-see-ems.” We slogged on and with each interminable notch of the river we got more and more angry until we were literally smacking water at each other with our paddles! I was never so happy to see the end of a long, long trip. Oh, but I’m meandering…back to the patterns…

This terrific website offers an interactive game to “Make a Roman Mosaic” and  mega-data on the topic of Greek Keys.

NEXT:  “Meandering with Piece by Piece Part 2” –  where we look at some ancient examples, and lay out the mural and get started with our pattern: a 7 unit, single turn, double inverse meander….say wha?!

see you next time!