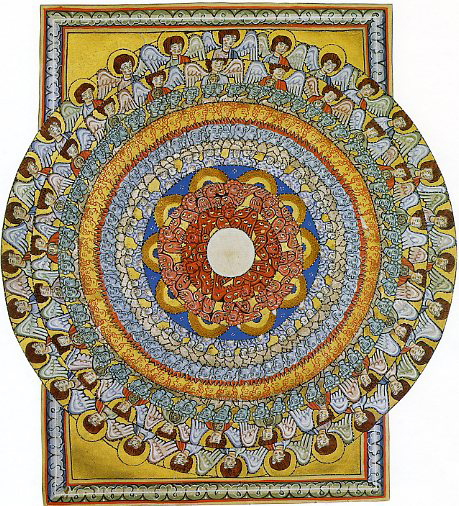 As a child, I often saw or felt ‘entities’ from other worlds. Many children report supersensory experiences and one such child was Hildegard von Bingen.

Hildegard of Bingen, (1098-1179) was born a tenth child to a German noble family. She was an influential and spiritual woman whose fierce devotion paved the way for future generations of women to succeed in fields from theology, to medicine, to music and art. At a very early age she claimed to experience supernatural visions of  a powerful, transformative light, but she hid her prophetic abilities until much later in life. She was admitted into a convent at the age of eight, and was prepared for a life of hermetic devotion and meditation.

Hildegard’s Awakening, a self portrait

Although Hildegard was not formally educated, her desire to record her visions and messages into book form was undeterred. She relied on secretaries to help transcribe her ideas onto paper and was a prolific writer on topics of philosophy, herbal medicine, the natural world, and a noted composer of hauntingly beautiful chants.

Hildegard became a well-regarded authority and the Mother Superior of her convent. Around 1135, at age 42, she undertook a series of  visionary symbolic paintings in unmistakable mandala-forms. While she did not make the illustrations herself, it is thought that she oversaw their production. These cosmic memories occur in myth and archetypes we readily recognize. The pictures were thought to be as strong or stronger than the words themselves. There is a gesltalt immediacy, what Hindu’s refer to as darshan, meaning the simultaneous act of seeing and being seen by a deity.

Hildegard can be seen sitting in the lower left corner of the illumination depicted above, receiving her visions in order to “art direct” her scribes and illuminators to her demanding standards. There is a drawing, or illumination, in her manuscript Scivias (Know the Ways), circa 1140–50, of her defining vision, in which the great span of the universe revealed itself to her in a trance as “round and shadowy…pointed at the top, like an egg…its outermost layer of a bright fire.”

Hildegard’s visions led her to channel cosmic laws into illuminations and illustrate invisible concepts such as ethers, air, and wind.  She assigns meaning to these elements to represent such virtues as atonement, righteousness, and moderation.

Central to her mandala paintings is the understanding of a ‘cosmic equilibrium’ and a reverence for all life. In her  use of ‘quartering of the circle’ we recognize the four elements (fire, air, water and earth), an archetypal depiction also used by Native American sand painters for the four sacred directions.  Her concept of Viriditas, the Greening, was a precursor to our ecology movement. She described this power as the agent of the God, a divine vitality, that was the animating life-force within all creation. This ‘Greenness’ was the very expression of Divine Power on Earth.

As Stephanie Roth explains in her article The Cosmic Visions of Hildegard of Bingen:

Since this extraordinary phenomenon called life could only be created by God, Hildegard believed, all that lives equally carried his Divine energy, or ‘viritas’ [sic]. In her own words:

Oh fire of the Holy Spirit,

life of the life of every creature,

holy are you in giving life to forms…

penetrating into all places,

in the heights, on earth,

and in every abyss,

you bring and bind all together

From you clouds flow, air flies,

Rocks have their humours,

Rivers spring forth from the waters

And earth wears her green vigour

This is the foundation upon which all her texts rest, whether songs, visions or natural observations.

In a time when women were not allowed self-expression, Hildegard used art for very specific communicative purposes.Though she did not use traditional reasoning to arrive at her realizations, she presents us with subjective experience of the heart, through art, poetry, and music.  Her work allows us to interpret and mold the ideas to our own personal experience and situation. This is not unlike the direct experience one can have with the illuminations in the recently published tome of C. G. Jung, the Red Book: Liber Novus.

There is a wealth of academic research available, and a growing curiosity and acceptance of her works. Perhaps now is the time for Hildegard’s fifteen minutes of fame? Just released, is a gorgeous, new German-language film “Vision” by Margarethe von Trotta. If you want to immerse yourself into the life and accomplishments of this “multitasking”12th-century nun, the movie is opening nationwide this week.

Judy Chicago’s Dinner  Party includes a Place Setting for Hildegard along with many significant women through the ages.

Illuminations of Hildegard of Bingen. Sante Fe: Bear and Company, 1985.  by Matthew Fox