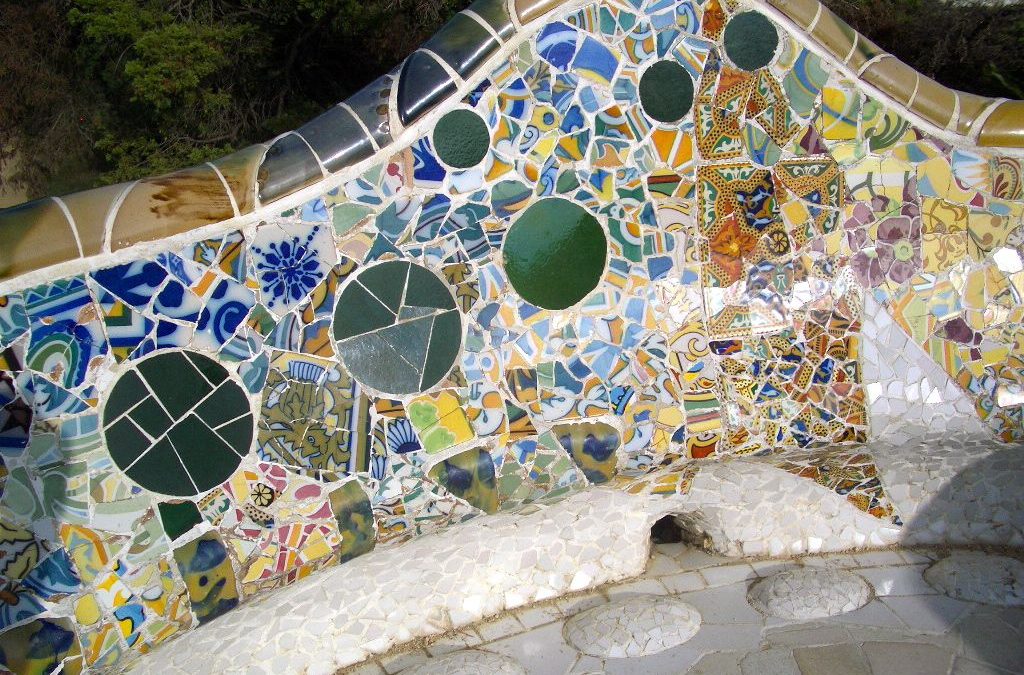 A recent study published by architect David Agulló Galilee, and geologist Daniel Barbé Farré,  in the Spanish history journal, Sàpiens, indicates that a psychiatric hospital known as Sant Boi de Llobregat, now links to the work of Antoni Gaudí as a testing site for the ideas employed at Park Güell and Sagrada Familia.  The undulating tile mosaic benches of Sant Boi were completed in 1912, two years before the construction of the famous benches at Park Güell.  They are both decorated with trencadís, the broken tile technique that is the hallmark style attributed to Antoni Gaudí, (1852–1926) as well as his collaborator, Josep Maria Jujol Gibert (1879-1949).

This bench covered with broken tile known as trencadís, was constructed in 1912. Park Güell was completed in 1914. Photo Enrique Marco, courtesy Sàpiens

The researchers suggest that serpentine benches were executed by the patients themselves, as an early experiment in what is now considered “art therapy”.  A close inspection of the tile setting patterns in the hospital benches show experimentation and variation with the size of the pieces, along with crude and poorly executed placement, compared to the work at Park Güell where more professional tile setters were employed. Up to now, the hospital’s benches were considered copies, but in-depth analysis and historic documentation suggests otherwise.

It is thought that the motivation for the joyful patterns and bright colors of the bench designs were intended for the main users who were expected to be children admitted to the hospital.  A children’s school had been opened on the hospital premises in 1907, five years before the benches were built.

Detail of bench from Park Güell, photo by author

Another detail from the 1914 Park Güell benches, showing the "balls" used re-direct the rain. Photo by author

Note use of pieced circle, broken tiles and edge moulding - the parallels are evident between the earlier bench done at the Sant Boi hospital and those of Park Güell. Photo Enrique Marco, courtesy Sàpiens.

The Catalan architect Antoni Gaudí broke all the rules with his early 20th century visionary architecture, drawing both criticism and fascination for his unique buildings and gardens. His internal spiritual life melded with his technical experiments in structural engineering and study of geometry. His visions and dreams made their way into flowing rooftops and ironwork, mythological dragons, sentinel-like smokestacks and most famously, his use of broken tile as an architectural covering, known as trencadís. Through the support and creative leeway granted by his major patron, Don Eusebio Güell, Gaudí was able to accomplish some of his most important works, including the world-famous UNESCO site, Park Güell, executed between 1900-1914.

A side entrance to Park Güell, shows use of stone and tile, photo by author

Is comes as no surprise that Gaudí would have supported the idea of working at a “madhouse” filled with mentally disturbed patients. Gaudí was very sensitive, and a devout Catholic dedicated to service. As an example, he fasted for two weeks prior to beginning his work for Sagrada Familia to purify his soul and prepare himself for the divine transmission needed to accomplish this momentous task.

This link to Art Therapy is explained further, in an article published in The Guardian UK:

“The Sant Boi hospital was founded by the widely traveled doctor Antoni Pujadas in 1854. It was the first hospital in Spain to treat mental illness as something other than divine punishment or demonic possession. Pujadas was an advocate of ergotherapy, which treats illness through physical activity, in particular through manual work. He was also in contact with the French psychiatrist August Marie, an early advocate of art therapy, who was a regular contributor to the Sant Boi hospital’s journal.”

As early as 1908, Gaudí worked on the construction of the crypt of the Colonia Güell on land less than one kilometer from to the Psychiatric Hospital of Sant Boi de Llobregat. The hospital was managed by Gaudí’s patron, Don Eusebi Güell.  Don Güell was closely associated with the hospital, and at one point, he even provided one of his houses as an isolation ward during a cholera outbreak at the hospital in the mid-1880’s.

In addition, the grounds of the hospital also include a series of caves very similar to the grottos at Park Güell, and the Sagrada Familia cathedral. The researchers believe the drawing plans served as unpublished sketches and the structures were tests for the structural theories and parabolic curves employed in the great cathedral.

In recent years we have seen a sharp increase in the popularity of mosaic-making.  Many practitioners note the solace found in the manual activity of setting mosaics. This has propelled the medium to the forefront as a popular craft and serious art form, as well as use in therapeutic and educational settings. Most notably, mosaic-embellished walls and benches are sprouting up all over the world, often executed by untrained participants, as a healing activity to build community and cooperation. Leading artists in this field include Laurel True, whose community-based projects can be found in Oakland, Ghana, Kenya and Haiti, and Lily Yeh, whose organization uses painted and tiled projects to heal and empower.

The repetition of movement, the slowing down, the mental focus required in seeing shapes and positioning the tiles, all contribute to neurological activities which stimulate areas of the brain that activate serotonin, a hormone associated with pleasure, elevated mood, and reduced anxiety response. The pattern-seeking brain balances and harmonizes with the symmetry of both mental and manual stimulation.

One can well imagine the beneficial effects this activity may have brought to the patients of  Sant Boi, working outdoors in the fresh air of their garden. The insightful doctors knew this activity would help the patients, even without access to today’s clinical tests and neurological science.

These investigations and conclusions by Professors Agulló-Galilee and Barbé-Farré have helped to accelerate current restoration efforts on the Sant Boi Hospital gardens.

The gardens at the beginning of the twentieth century, photo courtesy Sàpiens

Arts and Healing Network a clearinghouse for healing potential of art