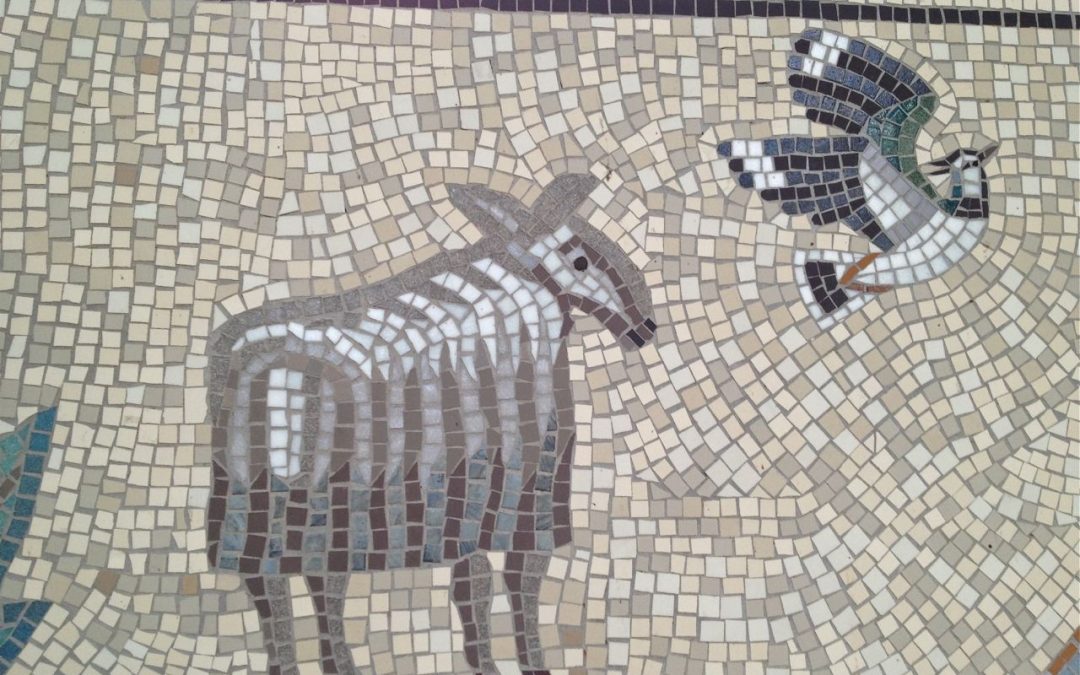 UPDATE 1 October, 2013: Completion Celebration and Unveiling of the Mosaic Pavement set for 10 October, from 2-4PM. All Welcome.

I moved to London a week ago.

One warm and sunny afternoon, I had to get outdoors, so I set out in no particular direction.

I’d heard of the Shepherdess Mosaic Mural Project and knew it was somewhere nearby. The mosaics are designed by Tessa Hunkin and made by a team of dedicated volunteers from the Hackney neighborhood, on the East Side of London.  My “Mosaic Sixth Sense” kicked in, and I walked right to the park, without consciously mapping it out.

I was so happy! The installation is set in the quiet corner of the community park, the Sun was warming the brick walls, and dappled sunlight danced on the surfaces. The environment was alive with pattern, memory, nature, history, and definitely, lots of love.

As I took in the large Roman-style panels, I could hear the basketball pick-up game in the background, the squeak of tennis shoes, the patter of the ball, the ever-present wailing sirens— it was my ambient music of the day.

The mosaic design is redolent with references from Roman pavements; from the guilloche braids and vine borders, to the geometric panels, to the setting pattern of the tesserae (tiles). Hunkin, a mosaic scholar of the highest order, has done her homework.

Detail of the mosaic panels

The elegant characters float upon the cream-colored background, effortlessly  flying kites, riding skate boards, listening to iPods, a nod to contemporary life in Hackney.  And of course, one panel is dedicated to herding sheep…the area’s former use.  (see more below>>)

The Past, Present  & Future unite here.

The arrangement of the panel characters reference the Roman storytelling by stacking imagery in tiered layers.The Shepherdess Mosaic Panels particularly feel like the Villa Romana del Casale pavements in Sicily at Piazza Armerina. Scenes of daily life; relaxation, work and play, depicted here in the London panels, by the season.

One thing that is decidedly not Roman, is the inclusion of the Maker’s Signature. In ancient times, it was uncommon for mosaic to be signed by the designer, nor the lowly craftsmen. If it was signed at all, it often bore the name of the Patron, very rarely the maker. Giving credit where credit is due, this project includes a long list of signatures, and the tumblr site features many pictures of the local people who rallied to work on the project. You really get to know them. One of the sponsors, The Lifeline Project, is Hackney’s drug treatment service. There are some wonderful poems written by volunteers about their experience of making mosaic and the beneficial involvement with the project. You’ll also find installation photos, and the unveiling ceremony, where everyone received a certificate! Do check out  http://hackneymosaic.tumblr.com/ for more background.

Though all the same colors, these square pattern samplers show a lot of variety in setting style

Above: A geometric grid shows the different hands of the makers, one sees the variety of lay pattern and styles. This is also a characteristic of Roman times where many people, even families, worked together on large pavements over a period of months, and even years.

Please continue to scroll down, story continues, with many more photos below…>>>

Frisbee jumping dogs are so lively

Looking Down: native plants festoon the pavements, along with real leaves dropping in the wind

Here’s a Peacock from pavements of San Vitale in Ravenna, Italy, circa 500 AD. Photo by author

The photos below show the name-sake ‘Shepherdess Walk’ panel, which is the name of the street where the garden is located.

The park has an interesting history and was originally just a path through a field from the City of London to Islington. In the mid 18th century a pub called The Shepherd and Shepherdess was built which offered frumenty, cakes and cream in its pleasure garden. Pleasure gardens were the pre-cursors of public parks and offered outdoor public entertainment.

By 1821 The Shepherd and Shepherdess had been rebuilt and renamed The Eagle, which became famous due to its mention in the nursery rhyme “Pop goes the Weasel”

My favorite panel, The shepherdess in action… all photos by author © LillianSizemore

OH How I LOVE the SHEEP! Each with a different setting-pattern to express their fluffy coats… enjoy the photos!

Which one is your favorite ?

A Shepherdess and her freshly shorn Sheep in attendance at the mural unveiling, June 2012. Image via hackneymosaic.tumblr.com

Baa-Ram-Ewe to thine own flock be true…

See also the Hackney Council’s write-up of the mosaics.  Congratulations to everyone on a job well done.  The project brings such a beautiful addition to the neighborhood, and a real sense of community pride.

MAP IT!  Find the garden HERE